Home
Fantasy
The Crown Breaker by T. B. Wiese (ePUB) 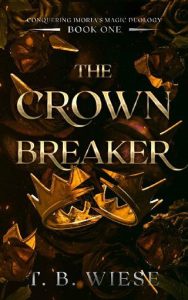 Rydel and his best friend, Luc lied, cheated, robbed, and killed their way from the slums to the throne, winning Rydel the crown and Luc the position of his captain. But the throne wasn’t the only goal. With the former king’s head on a pike, Rydel acquired the Mind Stone, one of only two magical items left in the country of Imoria. For the past ten years, Rydel and the other two rulers of the country have narrowly avoided conflict in their desperate search for the final Stone of power.
King Rydel is close, willing to do whatever it takes to possess the final Stone and gain ultimate power and control. But, when he almost loses Luc in an assassination attempt, he’s pushed to the edge, unable to fathom a world without the one person he cares about , the one person he desires even over power, the one person he … loves.
War rages. Alliances are made … until a devastating betrayal nearly shatters the unbreakable king who threatens to reduce Imoria to blood, bone, and ash.
No one is safe from Rydel.