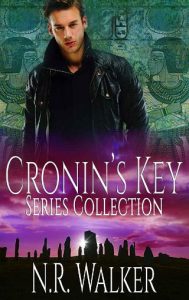 Book One
NYPD Detective Alec MacAidan has always been good with weird. After all, his life has been a string of the unexplainable. But when an injured man gives him cryptic clues, then turns to dust in front of him, Alec’s view on weird is changed forever.

Cronin, a vampire Elder, has spent the last thousand years waiting for Alec. He’d been told his fated one would be a man wielding a shield, but he didn’t expect him to be human, and he certainly didn’t expect that shield to be a police badge. Both men, strong-willed and stubborn, are still learning how to cope with the push and pull of being fated, when fate throws them another curveball.

Rumors have spread quickly of turmoil in Egypt. Covens are fleeing with news of a vampire who has a talent like no other, hell-bent on unleashing the wrath of Death. Alec and Cronin are thrown into a world of weird Alec cannot imagine. What he learned in school of ancient pharaohs and Egyptian gods was far from the truth. Instead, he finds out firsthand that history isn’t always what it seems.

With the battle of Egypt behind them, Alec and Cronin are enjoying the thrill of new love. Though fate doesn’t wait long before throwing them back into the world of weird. They know Alec’s blood is special, though its true purpose still eludes them. And given Alec’s inability to be changed into a vampire, Cronin is free to drink from him at will.

But the ramifications of drinking such powerful blood starts a ripple effect. With the help of Jorge, a disturbing vampire-child with the gift of foresight, Alec and Cronin face a new kind of war. This time their investigations lead them to the borders of China and Mongolia—but it’s not what lies in the pits beneath that worries Alec. It’s the creator behind it all.

In the underground depths of China, amidst a war with the Terracotta Army, they will find out just what the Key is, and what Alec means to the vampire world.

Twelve months after his change, Alec MacAidan is still getting used to his many vampire talents. While most vampires would give anything to have more than one supernatural power, Alec craves nothing more than peace and time alone with Cronin. But when Alec meets entities from outside this realm, he’s left powerless in their presence.

Zoan are half-lycan, half-dragon creatures that have slipped through time and reality, seemingly undetected by man and vampire. Or have they? They bear an uncanny resemblance to gargoyles, leaving Alec’s view on all things weird to get a whole lot weirder. This new quest leads Alec, Cronin, and their band of friends to Paris, Rome, and Moscow, where they learn that gargoyles aren’t simply statues on walls.

In the underground pits beneath churches all over the world, Alec discovers the Key’s true destiny. Facing the Zoan might take every talent he has. And he may need help from the dead to get them all out alive.

Book Four
Kennard and Stas have been enjoying being newly bonded mates, hidden away for the last six months in Stas’ cabin, deep in the forests of Northern Russia. When they get a visit from Alec, Cronin, Eiji, and Jodis, Kennard and Stas decide to return to London where they get news of a supernatural disturbance in India.

Excited for a new adventure, the band of friends embark on a journey as they’ve never seen before. Following a trail of snakes and serpents, they slip through gates into timeless dimensions all over the world, leaving them without their vampire powers. Even Alec is powerless as they follow a trail of gates and doorways to their final destination.

But the bad guy isn’t who they think it is, and Kennard will need to draw on his past to save their future. Because history is never what it seems.