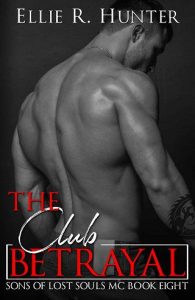 The Lost Souls MC are no strangers to violence and dodging bullets. As soon as they defeat one enemy, another arises. Only this time, they have two enemies to deal with, one an outsider and the other, a so-called brother. Loyalty is above everything to the brothers and now they’re looking to one another with suspicious eyes and trust is disappearing.

Cas vowed he’d never lose another brother or anyone he cared about again and it’s a vow he will not break. If there’s one thing he’s ready for, it’s a fight, and he will not rest until he has weeded out the rat and has taken revenge on everyone who has wronged him and his club.

Someone wearing the patch is going to die, the question is, who?