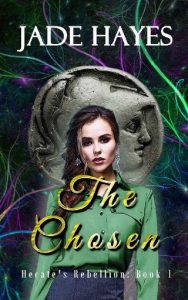 How does one go about finding a Greek goddess who doesn’t want to be found?

That’s the question Keira Artherton’s been trying to figure out for almost three months. Ever since Hades came up from his lair and decreed that Keira and her friends were to find the goddess Hecate and bring her to him for punishment. Things wouldn’t be so bad if he hadn’t stolen the soul of the man who meant so much to her, Leo Devereaux. But with just days left of a ninety-day deadline, time is not on her side.
Leo fought monsters for years as a SEAL, but none of his missions ever prepared him for the most important mission of his life: saving his soul from the Greek god of the dead. Entirely out of his element, Leo fights the darkness threatening to consume him as his hopes of finding Hecate by Hades’s deadline rapidly dim.
Knowing it’s now or never, they throw themselves into a last-ditch effort to locate the goddess. Straddling the line between the living and the dead, can they meet their deadline and restore Leo’s soul?