Home
Paranormal / Sci-Fi
The Children of the Gods Origins Duology by I. T. Lucas (ePUB) 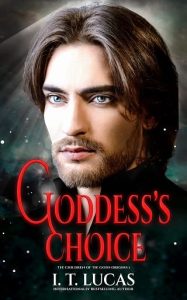 The Children of the Gods Origins Duology by I. T. Lucas – Free eBooks Download

Goddess’s Choice:
Since the dawn of human civilization, two warring factions of immortals have been secretly shaping its destiny. This is the story of Annani, the goddess who chose to follow her heart and by doing so altered the course of history.
The tale would sound familiar to most mortals, as its distorted echoes were recorded in the traditions of several cultures. Written in various languages, the names of the players were changed, and the story was adapted to fit different agendas, different moralities, different set of beliefs. It became a myth. But as all timeless myths go, at its core was a true story.

There was a time when gods lived among the mortals. They bestowed their benevolence, providing knowledge and culture and helping humanity establish an advanced, moral, and just society. In gratitude, the people worshiped the gods, expressing their adoration with offerings of their best goods and their freely donated labor.
The gods had unimaginable powers. They could cast powerful illusions that fooled the minds of thousands, projecting thoughts and images into the unsuspecting, inferior minds of mortals, and influencing everything from moods, to moral conduct, to a call to battle, and all the way to divine revelation and inspiration. Physically, they were perfect. Their bodies never aged, and their injuries healed in mere moments, but they could still die. Even a god couldn’t survive decapitation.

They were few. The limited gene pool combined with an extremely low conception rate prompted the gods to seek compatible mates among the mortals. Those unions proved to be fruitful, and many immortal children were born. But when those children took human mates, their children were born human. Upon closer examination, their scientists found a way to activate the dormant, godly genes, but only for the children of the female immortals. The children of the males were sadly doomed to mortality. Nevertheless, it didn’t take long for immortals to vastly outnumber the gods, and since they inherited many of the godly powers, they became a force to reckon with.

Annani, the daughter of the leading couple and one of the few pureblood children born to the gods, became the most coveted young goddess. Her mate would one day rule by her side. Mortdh, the son of her father’s half-brother and her official intended, was amassing an army of immortals. By promising him Annani, her father sought to appease Mortdh and prevent war over succession. Except, Morthd was not going to wait patiently for her father to step down, war was inevitable, and Annani refused to be sacrificed for a tenuous peace that wasn’t going to last. She was going to fight for her right to choose her mate, and the one she desired was Khiann, the son of a less prominent family who on the face of things didn’t stand a chance.

Goddess’s Hope:
It is said that the road to hell is paved with good intentions. Hungry for power and infatuated with the beautiful Areana, Navuh plots his father’s demise. After all, by getting rid of the insane god he would be doing the world a favor. Except, when gods and immortals conspire against each other, humanity pays the price. But things are not what they seem, and prophecies should not to be trusted.