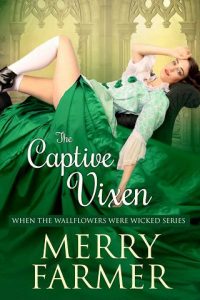 She had nothing left to lose…

Lady Lettuce Marlowe once had high hopes for her future, but now her life might as well be over. She’s been married off to a cruel, tyrannical man who has whisked her off on a ship bound for America. There isn’t a shred of hope on her horizon…until her ship is attacked by pirates.
He had more than enough on his hands…
Captain Martin Neville is days away from hanging up his pirate cutlass and settling into a life on land when a mutinous crewman gives the order to attack a merchant vessel without his permission. His crew captures the ship, but that is where Martin’s problems begin.
Martin and suddenly-widowed Lettuce are instantly drawn to each other, but their attraction has to compete with treachery. They must band together to save both ships and the good people aboard from the blood-thirsty intentions of the true pirates, all while battling a passion neither of them expected.