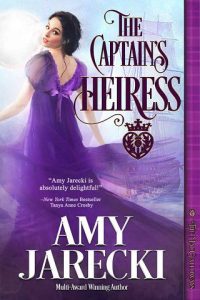 Captain Gibb MacGalloway might adore women, but he does not allow them aboard his ship…

Females are too distracting for his crew—and too distracting for him, truth be told. But when his brother, the Duke of Dunscaby, asks him to provide safe passage to Miss Isabella Harcourt, the daughter of an old family friend, Gibb has no choice but to bend his rules. However, it is not until the lass comes aboard that he realizes Miss Harcourt is the lovely wallflower he’d tricked into giving him a wee kiss only the day before.
Isabella Harcourt expected to spend her days as a spinster…
Until her father announces he has arranged her marriage to an American silver miner who is over twice her age. She might be disappointed at the news, but she accepts her fate and boards the ship, her life in tatters. Worse, things grow even more daunting when she meets the blue-eyed stare of the man who’d imparted her first kiss only one day prior—a very passionate, bone-melting kiss. Now they must make a voyage across the Atlantic, pretending there had never been an attraction between them, pretending they’d never met. After all, she is promised to another, and he is married to the sea. By the time the ship arrives in Savannah, will this star-crossed pair be able to say their goodbyes?