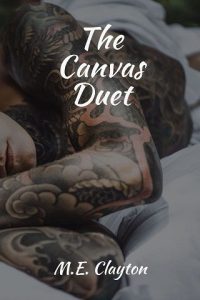 The Canvas Duet
The Enemy duet is a collective of books about four coworkers that find themselves in positions that they never imagined they’d find themselves in. When rumors, curiosity, jealousy, and lust start to blend into a dangerous cocktail, feelings start to come out in the most unexpected ways. However, with men that aren’t cowards and women that aren’t shy, it’s a hell of day at work.

His Masterpiece
Vera Baker has a crush on her boss, but it becomes so much more when she finds out why he’s called Ana. Now, it’s all that she can do to not climb Travis Hart like a spider monkey.
Travis Hart has always had a thing for his receptionist, but he knows better than to get involved with an employee, no matter how tempting. Now, if he can just keep convincing himself of that.

His Showpiece
Millie Houston might have a thing for her coworker, but considering his reputation, she knows better than to ignore all of Cason Parker’s red flags. However, it’s hard to resist a bad boy that’s a good man.
Cason Parker might have a reputation as a ladies’ man, but he’s secretly been in love with his coworker, Millie Houston, for years. However, it’s getting harder and harder to keep it secret.

NOTE: This book contains adult language, adult situations, violence, and explicit sexual encounters. If sensitive to any of the aforementioned issues, please do not read.