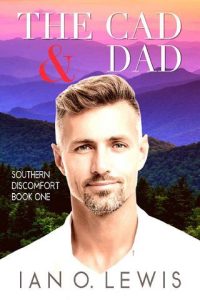 “Bless his heart. Cary thinks the sun comes up just to hear him crow.”

Thatcher Atticus Fuller is an award-winning novelist who believes his chances at love have slipped away. When he arrives at his mountain retreat and discovers his twenty-four-year-old son with an older man, he’s livid. It’s hate at first sight when Thatch lays eyes on Cary, but he’s determined to be an understanding father to his only child.
When events take a turn for the worst, he’s forced into being the obnoxious playboy’s caretaker. At first it’s hell, but soon he senses something deeper underneath Cary’s shallowness. Shocked at his attraction, he fights it, but in its quest to find love again, the heart has a way of forgetting reason.
Millionaire Cary Lancaster refuses to settle down, preferring much younger men. He’s a charismatic man who can literally charm the pants off any man he desires. When he begins dating Sam Fuller, a handsome twenty-four-year-old who has a thing for Daddies, Cary thinks he will be adding another notch to his bedpost. Instead, he sets off a chain of events that flips everyone’s world upside down.