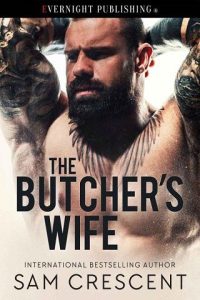 Valentina has been picked to be The Butcher’s wife—the most deadly man within the Rossi mafia. He’s exactly what men fear, and now she is set to be his wife. He could have any woman, but instead, he picked her. Why? She was passed over by Thomas Rossi’s son because she was broken and damaged.
Giovanni Romano is a monster. After his family was killed when he was young, he spent his entire life becoming a killing machine. He swore his loyalty to Rossi, and what he wants more than anything is Valentina. He saved her, and now he’ll allow her the chance to live and thrive.
Valentina never expected to fall for her husband. He’s terrifying and dangerous, but the moment she’s close to him, he sets a fire inside her. When she’s with him, she feels complete and never wants to be without him.
Now it is up to Giovanni to protect his wife when it matters most, or will he be doomed to lose the only woman he has ever loved?