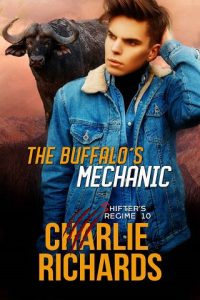 Keeping the Peace: While attending a fellow enforcer’s wedding, a water buffalo shifter runs into his own mate in a skittish human in need of protection.

Austin O’Malley doesn’t intend to stay for the wedding reception. He’ll watch the service and offer his congratulations before leaving. While he’s happy for his friend, he doesn’t want to bring down the spirits of the other guests with his dark attitude. Then he plans to head to his mountain retreat and enjoy a secluded vacation that’s been a long time coming. He needs the time to come to grips with the deaths of his two middle brothers as well as what he must do next—reach out to his estranged youngest brother with the news of what’s happened.

All Austin’s plans change when the headiest aroma teases his nostrils while at the wedding. Sitting in the back, he doesn’t know where it’s coming from, making the ceremony the longest twenty minutes of his life. Afterward, he tracks the smell to a cute little twink with soulful brown eyes. A whispered question to a friend he’d seen talking to the man reveals his name is Pete Saugner, a councilman’s private mechanic.

When Austin approaches Pete, he’s alarmed by the fear he spots in the much smaller man’s eyes. A fellow shifter shares what Pete’s scent should have told Austin. His mate is human, although he does know about paranormals. Can Austin figure out how to connect with Pete and keep him safe from a specter from his past?