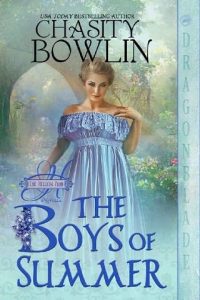 For the first time in her life, she understood how a woman might be led astray.

Playmates during one magical summer on the coast, Clarissa and Gus made a vow to one another: when they were older, when they were both free of the shadows of their neglectful and abusive fathers, they would marry. But that was a child’s promise and, like so many things in childhood, it was all but forgotten, or so Miss Clarissa Milton thought. Then she meets the compelling and powerful Augustus Brandeis, Duke of Atherton, at a house party. She doesn’t immediately recognize him as her childhood friend, but she is drawn to him in a way that she cannot explain.
Augustus knows her instantly. In fact, she’s the very reason he came to Southampton to start. He’s there to fulfill their childhood vow by making her his wife. But having seen her again, it’s more than simply the desire to honor an ages old promise.
Clarissa is everything he could have ever desired in a woman… and he means to show her that there is nothing childlike in the way he feels for her.

(Note: This story was first published as part of the Anthology set titled Get Your Duke ON in August 2022.)