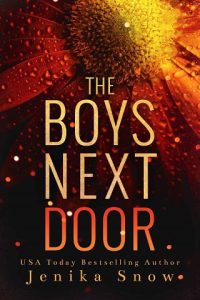 Losing her virginity against the side of a house during a party wasn’t what Sasha Marsh had envisioned for herself.

But then things took a kinky twist when she found herself in bed with both Ashbury twins.
Now, six years later, that night seemed like a distant dream or maybe a hardcore fantasy.
Being back home after so long made Sasha realize she wasn’t prepared for the intense emotions that bombarded her when she sees the brothers again.
But it seemed like fate wanted a repeat performance because she found herself in another torrid encounter with Tanner and Jonas.
But can a relationship with the twins really work, or do they only want Sasha for one thing?

Reader Note: This was previously published under the title: Being with the Brothers Next Door. It’s since been recovered and reedited. The story itself is the same. It contains MFM and DP scenes.