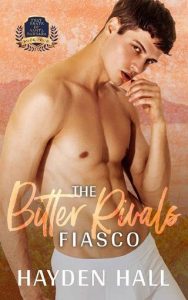 I fell in love with the enemy. Twice.

Hudson
For my twenty-first, I threw a masquerade party and met the most exciting guy on the planet, dressed as a fallen angel. Then, I never saw him again.
And just when I think my life is perfect, in walks my nemesis, Tate Anderson.
The guy’s got no finesse. He looks down on everyone, especially me. So, when the mischievous wannabe matchmaker of a professor forces me into a project with none other than Tate, I seriously consider dropping out.
Except, the more time I spend with him, and the more we growl and bark at each other, the tighter my chest feels around him.
To put him out of my mind and escape the feelings I’d kept at bay for so long, I keep throwing the biggest parties in the city. Like some modern version of Jay Gatsby, I hope to run into my mysterious fallen angel, but he’s ever so elusive.
Until he shows up again.
And I take his mask off…

Tate
My life sucks but don’t make a mistake thinking I would let anyone know. Especially not Hudson Blackwood. That guy’s gloating enough already. Ugh… He laughs too much, pretends he’s so cool, nothing really bothers him.
Well, except the fact he’s stuck with me on a semester-long project. But I’m stuck with him just as much. He’s also hot as hell and knows it, which makes him infinitely more annoying.
And if that’s not enough, my stepmother is spending the last of my late dad’s fortune on her two sons and I have to study every waking moment to keep my scholarship.
The only escape I’ve had since coming to Santa Barbara were the masquerade parties a tall, handsome guy dressed as The Phantom keeps throwing.
Before I know it, I am hurtling into love and I hate it. I know my stepmother will uproot me again before the year is done. Besides, I don’t even know who this smoking hot Phantom is. This can only end one way, and it’s not good.
It’s just better for everyone if the masks stay on.