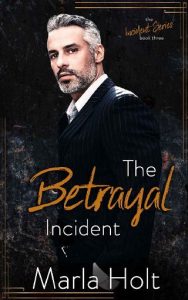 Because of his betrayal, Phoenix walks away from the only man she’s ever wanted. Can Robin find the strength to fight for their love?

Phoenix Lambert doesn’t have time for men. She’s too busy running pop star Van Birch’s empire. But she can’t get a certain silver fox out of her head. One night together turns into two which turns into sneaking around to be together, because oh yeah, that silver fox is also her best friend’s dad.
Twice widowed Robin Birch isn’t in the market for a third wife. He has a busy law practice to run and a bid for Congress to win. But when Phoenix falls into his arms, he can’t make himself let her go–or confess to his daughter that he’s been sleeping with her best friend.
When Phoenix refuses to be his dirty little secret, Robin thinks it’s over. But their relationships with Van keep pushing them back together. Can proximity and the promise of love bring them back from the brink of betrayal?