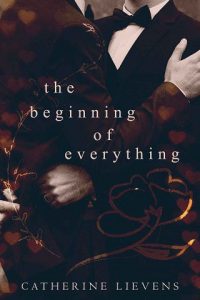 The Beginning of Everything by Catherine Lievens – Free eBooks Download

Prince Clarence James Henry Nelson hasn’t been a prince in ten years, and he doesn’t want that to change. With his family’s blessing, he roams the United States on his bike, leaving the country of Fendalle in his father’s capable hands.
Until tragedy strikes.
Jamie is reluctant to take the throne he was never meant to inherit, but he owes it to his father and his brother to make sure the country they loved so much thrives and to find out if their deaths really were an accident. It doesn’t matter that he’s tattooed and pierced—he’s the new Fendalle king. Being the king comes with problems, but it also comes with his father’s personal assistant.
Jamie didn’t expect Miles to be so…Miles, or to fall in love with him. He wants more than the professional relationship they already share, but Miles wants him to put the kingdom first, and him second.

The Beginning of Everything is a HEA standalone slow burn MM romance with a tattooed biker turned king who doesn’t care about rules and a bossy personal assistant who’s planning to whip the new king into shape.