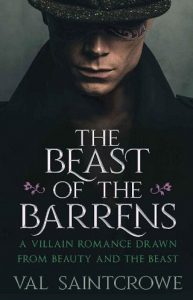 The Beast of the Barrens by Val Saintcrowe – Free eBooks Download

Welcome to the Barrens, the glittering underbelly of the city of Rzymn, where street lords rule.

They call Chevolere Vox the Beast of the Barrens because of his beastly appetites. He enjoys getting his fists bloody, so it’s not wise to cross him. It’s said his ruthless propensities with women have gotten him barred from every whorehouse in town.
So, when the Beast of the Barrens wins Ziafiata Abrusse in a card game from her street lord father, everyone is both horrified and concerned for the girl, even as they are too terrified to intervene.
Ziafiata is delivered to the rooms above his tavern, shut up and imprisoned to wait for his monstrous attentions.
No one is expecting her emerge, weeks later, on Vox’s arm. He appears besotted, enamored, even tamed.
Everyone would be surprised to know he’s barely touched her, that they haven’t so much as kissed. However, they might think this is perhaps because Ziafiata’s sweet innocence has awoken some gentlemanly tenderness within him.
They’d be wrong. Ziafiata has not swayed him with her meekness. Quite the opposite.
No, this savage beauty has proved to be neither innocent nor sweet. And her ferocity has driven this beast to distraction.