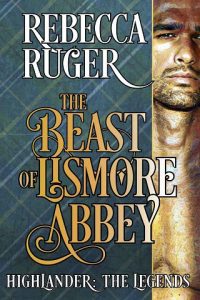 Lara is a peasant without home or family, without even a surname to call her own. After the siege of Lochmaben, from which she barely escapes, she and others from that burgh find refuge in the Selkirk forest. All that she loved has been heartlessly taken from her and she lives a mean existence, indifferent and joyless.
Soon whispers invade the forest encampment about the coming of the Beast of Lismore Abbey, telling of his prowess upon the battlefield. Her very first glimpse of the beast is of a naked man rising from the loch. No beast here, but a god, one she’s determined to avoid at all costs. She doesn’t want to feel anything for anyone, ever again.
Magnus Matheson rides into the leaderless camp, attempting to cull soldiers from the weary ranks for the army of Robert Bruce. He meets Lara and is immediately and undeniably entranced by the ethereal woman with the icy demeanor. The mystery of Lara stirs him as much as her kiss does and when forced to depart, he begs her to make for Lismore Abbey, where he vows to her she will know freedom from fear and from sorrow.
Lara believes that futures are promised to no one. She has no plans to succumb to his very un-beastly courtship and seduction, but soon finds her head overruled by her body and heart.

Can Magnus really teach her how to love again?