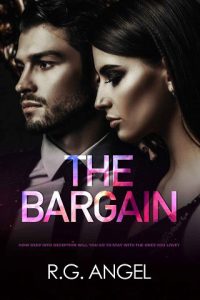 When a hard knock raps on her door, Amber Collins doesn’t want to answer it.

She knows it’ll be a battle she won’t be able to win.

At twenty-one years old, she’s struggling to make ends meet, but she would endure anything for her six month old nephew whose big green eyes bring a smile to her face on the worst of days.

And today is the worst of them all.

As the knock turns into a deafening bang, she steels herself to confront the rich, powerful, and chillingly handsome Dean Beaumont. The baby’s uncle who most certainly has come to take him away from her. Deceiving him was the only way.

Now, she’s being taken to his country estate for six months to prove she’s a fit mother. As time goes by, Amber finds herself with another fight on her hands, the need to safeguard her heart from the ruthless but charismatic Beaumont. The closer she gets to him, the more she wants him to know the real her. Not the drug addict hooker her sister was. But if she tells him the truth, she will lose the baby and him forever…