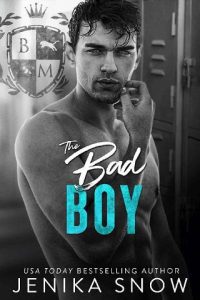 Around the campus of Black Mountain University, Alex Sheppard had the reputation of being the star football player, partying hard, and having a pretty face that had girls lined up and ready to drop their panties. He also had an arrogant attitude to match and is known as being a bad boy.
And he embraced the hell out of it.
But when he first met Mary Trellis, the quintessential good girl, he gets knocked on his ass with so much need that he knew he had to make her his. He just needed to convince her that they’re meant to be together even if they are like oil and water.
But his wild ways finally caught up with him and he’s put on football probation due to a failing class, and everything he’s worked for is threatened.
How perfect was it that Mary was one hell of a tutor. Not only would he get the help he needed, but he now had a way to get close to Mary.
So when Mary Trellis offers to tutor him in exchange for a date to her sister’s wedding, Alex sees it as an easy ride.
She’s smart, hot, and all Mary wanted in return was one weekend of his company.
When Mary was approached by campus bad boy Alex Sheppard, she knew she should have turned him down. But that was before she needed something that only he could give her.
A date to her sister’s wedding.
She’d help him, and in return she’d get her nagging mother off her back and seem like she had her life together in front of her family. And what better way to give her stuck-up parents the proverbial middle finger then bringing a vulgar, obscene boyfriend to crash their snobby party?
But Mary didn’t realize what she was fully getting herself into where Alex was concerned. Because the more time she spent with him, the more layers she realized he had… and the more she wanted him. No matter how much she tried to refuse her feelings for him, Mary found herself falling for Alex.
She just hoped when she finally gave in to the bad boy she didn’t end up walking away with a broken heart.
Reader note: This was previously published as “Denying the Bad Boy”. It has been totally rewritten and gone through extensive edits to fit the Black Mountain Academy world.