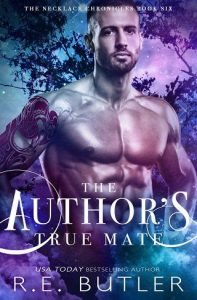 Paranormal romance author Trinity Jeremiah loves to write about bad boy alpha wolf shifters and the women who love them. When she attends her first book signing, a fan begs Trinity to write a story redeeming her series’ most popular villain, Wrath. When Trinity refuses, the reader gives her a parting gift of a necklace that – when she puts it on – sends her into a realm that mirrors the stories she’s written.

Wrath Valentine, alpha of the Blood Wolves, has been dreaming about a curvy brunette for years. Despite being the best hunter and most powerful male around, he’s never been able to find his true mate, the female he’s certain haunts his dreams. The endless nights without his true mate have filled him with blood lust, and he spends his days trying to destroy the other alphas and take over the realm.

When Trinity wakes up in Wrath’s bed sporting the bonding tattoo that matches his, she isn’t interested in getting to know the alluring man who haunted her dreams – she wants to get back to reality. Discovering that the reader who cursed her into her book’s reality is a character she wrote about in a story, Trinity learns that she’s definitely not dreaming and the stories she wrote about actually happened – in another realm. Trinity will be faced with the toughest decision of her life – leave Wrath behind and return to her own world or stay in his forever.