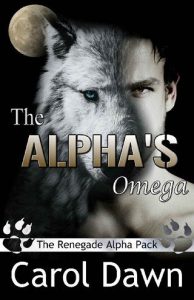 Cora:
My name is Cora, and I’m an Omega. Being an omega in a world of alphas is scary. Especially in my father’s pack where they think an omega is only good for one thing. Breeding. The alphas in the pack sit back and watch me with hunger-filled eyes as they wait for my first heat to hit. Once it does, my life, or what little life I’m allowed to have, is over.
But, when my brother decides to take me and leave, we land ourselves in with a group of renegade alphas. So, here I am, an omega about to go into heat, surrounded by alphas. One of which claims that I am his mate.
Too bad omegas don’t have mates.

Noah:
I’m Alpha of the alphas.
We call ourselves, The Renegade Alpha pack. We’re a group of outcast alphas that don’t fit in with other packs. We’re a small pack of four but so many alphas together isn’t always a good thing. Fights happen more often than not over the smallest things.
To make my job even more difficult, a couple of my pack members found an alpha and his omega sister on the run. Now, they’re staying with us. An omega, surrounded by unmated alphas.
To make matters worse, the omega is my mate, but she refuses to accept the truth of it.

It turns out that having an omega in the pack is far riskier than I originally thought. But, I don’t care what I have to do, who I have to kill, no one will harm a single hair on my mate’s head.