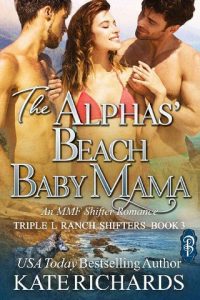 A pre-mating vacation, a delayed honeymoon, and three wolf shifters—a MM couple and a single female alone together in a tiny, isolated beach cottage for two weeks. What might happen next?

Diana
Not every wolf has a fated mate, and I’d come to the conclusion that it was not going to happen for me. So, I agreed to mate with one of my friends from childhood who also had given up on the mating likelihood. But with the mating date coming up, I decided to break with tradition and head for the beach. It was time for this mountain wolf to visit the ocean before settling down to my pleasant future with Crain.

Andrade
My mate and I had waited a long time to take our honeymoon. My mate’s new status as alpha had thrown our plans into an uproar, but we were finally able to visit the small beach town where my parents had spent two weeks after their mating. The trip was a wedding gift and one we’d looked forward to. Finally! Two weeks alone on the stunning California coast. Just the two of us in a cottage with nothing but empty beach and ocean in front of us, golden rolling hills behind us. Paradise

Zion
I never wanted to be alpha, but in the interests of pack unity, I fought and won the position. The other wolf wanted the job too much, and I feared, many others as well, that he would put his own interests and those of his clique before the needs of all. So, a year later, with things quiet and running smoothly, my mate and I were unpacking our gear in our honeymoon cottage, looking forward to a run in the hills and a swim in the waves when she came along. Alone. Lost. Hurt. And with no idea who she was or how she got there. Of course we had to take her in. But now what? Miles from any other homes, even farther from a town, and with both our wolves looking way too interested in her. This was not the honeymoon I planned on.