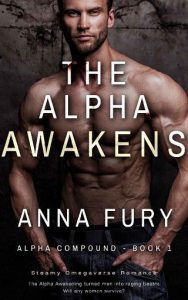 When the Awaken Virus hit humanity, men became ravenous, uncontrollable beasts. They wrought destruction across the globe—now the humans who remain live in constant fear.

Mallory
As a reporter, I’ve seen firsthand what the Awaken virus does to people you love, turning them into mindless beasts intent on violence. That’s why I’m staying safe inside my apartment. Women are getting kidnapped right off the streets in broad daylight. Rumors say there’s a group of Awakened living under New York, and they’re responsible for the disappearances. The old me would have sniffed out that story, but post-apocalypse Mal is too scared to go digging for clues.
Life apparently has other plans for me, however—cue an Awakened showing up at my damn door. He’s huge, imposing, with piercing gray eyes like a thunderstorm, and a mouth he insists he *needs* to put on me. He also claims they aren’t all the destructive beasts I’ve seen on the news. I’m not sure what to believe.
When the captivating “enforcer” asks me to live in his compound for two weeks and report to the rest of the world how normal the men really are, I surprise us both by accepting his strange invitation. I shouldn’t have said yes, so why did I agree?
My presence digs up something dark and primal in him though, and I’m terrified to find out if I’m his salvation, or complete downfall.