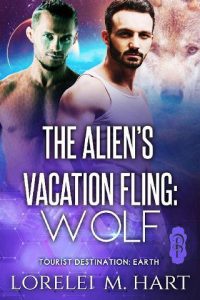 Nevol booked his “human” style vacation when he had a mate to travel by his side—before that mate left him for another. No ex of his was going to ruin a perfectly good adventure to a far-off primitive planet. Not when he could go alone. Nevol longs to explore all that humankind had to offer. He doesn’t expected his reservation to be at a resort away from the cities, and he sure hadn’t expect to be drawn to his human neighbor who wasn’t quite human.

Omega wolf shifter Anderson needs a place to crash while he adjusts to being rogue. Leaving his pack and packlife was the most difficult decision he’d ever made, but it was one he refused to regret. His brother deserves to be alpha without any of the pack whisperings of it being Anderson’s birthright just because he was born five minutes earlier. When he stumbles upon River’s Bend Resort, he knows he’s found his temporary home. It offers everything he wants: a beautiful lake, the quiet wilderness, and a sexy stranger in the next cabin.