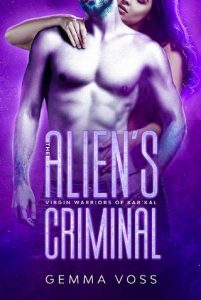 Those legends from the scrolls that spoke of breeding mates and bonding ceremonies— they were just the lost ways of history. Fuel for imagination.
Until I saw her. Now, it’s my reality.

Life has been a prison for Max since the first moment aliens arrived to colonize Earth. She doesn’t feel much differently now that she’s under house arrest for her associations with an Anti Alien gang that her father helped to found. She wants out, but she’ll need some cash if she’s going to escape the clutches of the gang’s leader… who just so happens to be her controlling ex-boyfriend. When an alien comes to her with a proposal— help him study the so-called “mating bond” between them for a payout— Max decides a little experimentation is a small price to pay for a chance to disappear.

Since an attack on his home planet nearly extinct his species, Kiva knows he’ll have to put aside his beloved research project and focus on ways to help the few remaining members of the Kar’Kali race. However, he’s suddenly become the subject of the exact ancient mating call he’s spent so long reading about in dusty old texts. How can he turn down an opportunity to experience what he’s only ever theorized about?