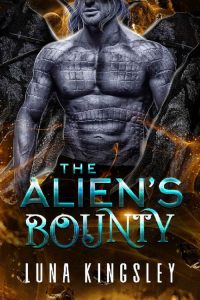 Maren, a voluptuous spitfire, doesn’t trust easily. Her past experiences with men have seen to that. So, she’s keeping her head down and working hard to establish herself as an intergalactic medic. She’s doing her best to ignore the one who watches her from the shadows but he’s impossible to ignore. Not to mention unconventionally sexy. Really, really sexy.
Kraal, a powerful dhevieth warrior, has fought this inconvenient attraction since he set eyes upon the curvy, brown-haired human. He’d force himself to forget her if he didn’t carry so much guilt for what the females had to endure while on the sky island of Bameh. He’ll make it up to her by making sure she’s safe on Nedruinia while she finishes her studies…no matter how many times she tells him to leave. For now, he’ll watch her and try to keep his thoughts of claiming her to himself.
Meanwhile, battle lines have been drawn on Bameh. The humans aren’t safe and they’re attracting unwanted attention on Nedruinia as well. After an attempted kidnapping, an injured Kraal finds himself away from the healing core of Bameh too long. He needs Maren’s help if they’re going to survive but she’s going to need to trust him. But she doesn’t trust anyone—not even herself.