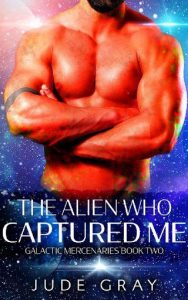 Abducted and held by an alien breeder, so far I’ve been left alone.
But then they bring him into my cage…
The warden tells me that the injured red alien male with the ridged face and wild hair is a rich, powerful mercenary. That he built his wealth killing men.
From the look of rage and death in the big mercenary’s eyes, the warden is going to be next on the list.
There’s also something in his eyes when he looks at me. Something just as dangerous.
Something hot.
Still, he brutally fights the guards who try to force him to take me, and I realize he’s not the bad guy. We’re both prisoners here.
And to keep him from being hurt, I may do something I never in a million years thought I’d do.
I may give myself to an alien.
The warden may have captured my body, but I’m not completely certain that the tormented mercenary hasn’t captured my heart…