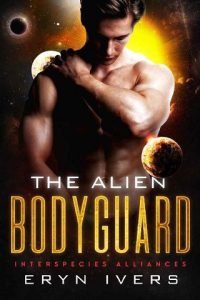 Oliver Turner has been given one last chance to regain his rightful position by his father’s side, running the family corporation, but he can’t keep his eyes off his klah’eel bodyguard. Oliver wants the man with an intensity that both scares and shocks him, and he’s terrified of letting the desire pass him by after being so afraid for so long that he’d never desire a man again. But Oliver has spent his whole life chasing the love and approval of his father, and he can’t let that slip through his fingers when he’s so close.
Captain Mal’ik can’t believe that the yearning, longing scent pouring from the beautiful human man he’s been assigned to protect is for him. Mal’ik has been a soldier for decades and bears the proof of it in his mangled face and metal arm. Surely the prissy, brilliant young man can’t want him of all people. And yet, the way Oliver Turner looks at Mal’ik makes him feel like he could be so much more than just the scarred tool of an empire.
As Oliver and Mal’ik wrestle with their surprising and unfamiliar feelings, the tense political situation surrounding them explodes into chaos. They will both be forced to make choices they never thought they’d make. Is it even possible for them to choose each other?