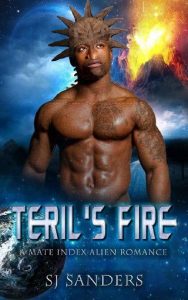 A Calysii prince wants Crystal Inola Rivers dead and it’s all her ex-boyfriend’s fault. Ex-boyfriend because the louse ran off, leaving her to deal with the fallout. She told him that stealing from the royal Calysii ship docked was suicidal. Now they are looking for what he’s stolen, and she’s being held responsible. It was only by luck that she managed to avoid the attempt on her life, now she only hopes that disappearing into the universe as a Mate Index Mate will keep her hide in one piece. If that means her urban ass being dumped as a mail order bride on a backward planet as a mate to a pair of enormous Teril farmers…well, she’ll fake it until she can make it. How hard can it be? They certainly have what it takes to make the ground move beneath a girl’s feet. Things are getting hotter for sure, and not just because a nearby mountain has started smoking.

Grish Ugaar has done something guaranteed to make his brother angry. He ordered a mate for them from the Mate Index, a soft female to bring them joy and comfort. Two things that his brother, Borth needs. He had not been the same male since sustaining grievous injuries on Agraadax that led to their early retirement from the Intergalactic Fleet. Scarred, and one leg so badly damaged that it was replaced with a metal prosthetic and support braces that it gave it extra durability during hard labor, it was no secret that Borth felt like half a male. Although his brother claimed to not want to subject a mate to his appearance, Grish knows his brother well enough to know that a mate is exactly what they need—a purpose and a family to care for and protect.

They need more than their farm they retired to build on Antari Minor. When Crystal arrives, she is everything that he and his twin could ever have wanted. She is running from something and yet, when a volcano threatens everything, they must rise to duty once again to protect their home as well as save their mate from the danger following her.