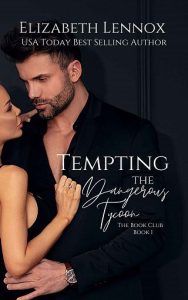 He would never be played for a fool!

Stavros Teresi was furious when he learned that one of his previous mistresses was going to release a tell-all book about him. He had to stop her! And as soon as he met the beautiful, spunky Annie, he had a two-part plan.
What he hadn’t expected was to discover that the gorgeous baker was more than just frosting deep. She was more like a jelly donut – sweet and wonderful, exciting both inside and out. Something about her called to his soul and soothed the angry beast inside of him.
He also hadn’t expected to find out that she’d embezzled over one million dollars from him!

Annie Stevenson prided herself on two things: her creative, crazy donut flavors and her ability to run a kick-butt bakery. Until one day when she realized that she’d been robbed! Now she couldn’t pay the rent on her business space! Her only option is to appeal for a bit more time to resolve this latest crisis.
Meeting Stavros Teresi, the building’s tall, hunky, oh-so-fabulously-scary owner was a shock. And she was even more stunned when he proposed! Yes, it would be a fake marriage. But as she stared up into his challenging eyes, Annie realized that this man needed her. And she…maybe…needed him?

So when he accuses her of stealing from him, her whole world is shattered. Could she find the true culprit? And when she found this person, could she ever forgive Stavros for thinking she could commit such a heinous crime?