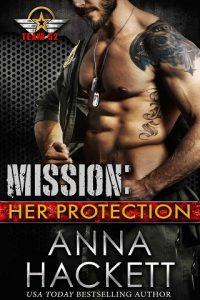 They are a covert, black ops team known only as Team 52. Their mission: to secure and safeguard artifacts deemed highly dangerous and classified…and protect the women who capture their hearts.

Get the first three action-packed military romances in the Team 52 series.

Mission: Her Protection
When Rowan’s Arctic research team pulls a strange object out of the ice in Northern Canada, things start to go wrong…very, very wrong. Rescued by a covert, black ops team, she finds herself in the powerful arms of a former special forces Marine with scary gold eyes. A man who vows to do everything and anything to protect her.

Mission: Her Rescue
When archeologist January’s plane is shot down over the Guatemalan jungle, she knows she’s being hunted for the invaluable Mayan artifacts she’s carrying. Only one man and his team can save her, the covert, black ops Team 52, and the distrusting former CIA operative who drives her crazy.

Mission: Her Security
Kinsey loves her job as logistics manager for the covert, black ops Team 52. She loves all the team…especially big, gruff mountain man Smith, even if he isn’t interested in her the way she’d like. But when she’s kidnapped by dangerous criminals after a deadly artifact, her survival depends on the big former SEAL who’ll risk anything to get her back.

**Each book in this action-packed military romance series can be read as a standalone.