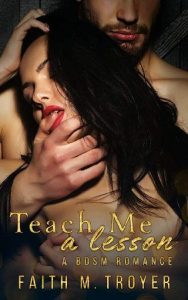 When Sloan moves to Avalon, California, he sets his sights on two things: his new job and finally finishing his bachelor’s degree. However, all of that changes when he first sees his beautiful next-door neighbor, Harper. It seems that the two don’t have that much in common; they don’t talk much either. The last thing he needs is another sexy distraction. After Sloan receives his schedule for his last semester of school he assumes that H. Brewin is a man, and is shocked to his core that he finds out it’s Harper! The semester has been interesting, to say the least, and the two have been getting to know each other in some pretty intimate ways so far. So when a former flame comes to blow Harper’s past wide open, both Sloan and Harper are left devastated.