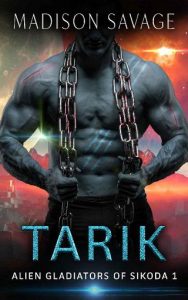 When this captive gladiator holds his mate, he’s a brutal beast only on the outside…
Mostly.
After her abduction, Kaci was given to an alien gladiator–a huge male whose sentence was reduced when he agreed to spend ten years fighting for the wardens of Sikoda prison.
She was meant to boost his morale, reenergize him, give him a reason to continue being the best fighter in Sikoda.
She never expected to see him as anything other than an enormous, rough, vicious inmate who had the right to do whatever he wanted to her. She didn’t imagine that hiding behind his rough, raging exterior was a tender man who would do absolutely anything to protect his mate.
She’s consumed by his fierce, hungry passion, captivated by his battle-scarred body, and awed by his savagery in the arena.
But when the wardens pit him against his most vicious opponent yet, will he survive long enough to get her out of the brutal Sikoda and to the freedom he was promised?