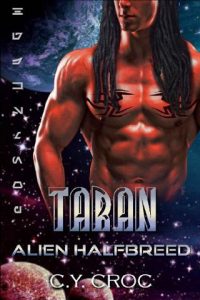 “I want to protect her. I don’t want any other male touch her – but I can’t let my guard slip!”
Taran is an undercover Federation officer on Planet Desra.
An assignment places him in an exotic dancing club where he’s exposed to illegal female trafficking and an unknown species with curves that he’s only dreamt about.
As bodyguard to all the females forced to dance there, Taran finds himself drawn to the unknown female species in particular.
However, his assignment is not to stop the illegal trafficking, yet he’s determined he’s going to help the females before his mission ends – especially the small female with the curves that drive him wild each time she dances.
But whatever he does he mustn’t let his guise slip or he might put them all in danger.
Kimberley thought her exotic dancing days were history, but as she heads off to start her new life in the army she’s abducted by short hairy rodent faced aliens. Now, she’s made to dance against her will, and this time the club’s in a different galaxy.
Being forced to dance again is only made bearable because a hot 7ft red alien with long black dreadlocks, tattoos and a spikey tail becomes her bodyguard.
If only she can get him to notice her, then being stuck in another dimension wouldn’t seem so bad after all.