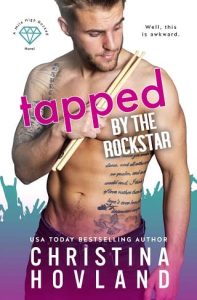 Internet fame isn’t all it’s cracked up to be.

As a teenager Samantha Johnson wrote a song that went viral in all the wrong ways. A pop song about her love of mozzarella sticks. She hoped for adoration but instead became a joke for an entire generation. She absolutely does not want to be in the limelight ever again. Or even near it. Since then, she’s kept mostly to herself. But then she gets set up with a guy who turns out to be a rock star, and she risks the spotlight falling on her once more.
Dimefront’s awkward drummer, Tanner Penton, never expected to live the rock star life. Even though he’s living the dream, he’s still fighting his past and the hurt caused by young love. He’d like to figure out how to actually speak to women without getting tongue tied. Unfortunately, his friends covertly fix him up with a woman he can’t form a coherent syllable around. He gets flustered, his face heats, and… it’s a whole thing.
Tanner must learn how to be authentically himself with Sam if he’s going to make this last. And Sam must put the past behind her