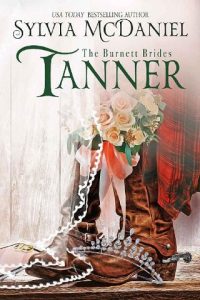 Can a Matchmaking Ghost Heal Two Broken Hearts?
Tanner Burnett served his country well in the Iraq War. Now he’s returned home with a badass case of posttraumatic challenges. The least little noise has him taking cover. So when a ghost starts talking to him, he thinks she’s just another PTSD hallucination.
After graduating culinary school in Boulder, Colorado, Emily Young became the newest rising star in the world of the culinary arts. Yet, two years after her husband’s death, his memory still haunts her. Needing a fresh start, she takes a job at the Burnett Ranch in Texas.
Only problem…she has a one-night stand with a man she meets in a hotel bar, later to learn he’s her new boss. Can a matchmaking ghost bring two lost souls, who never intend to marry, together and heal them?
Can One Night of Passion Cook Up a Forever Love?