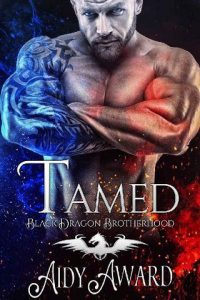 He has a darkness in his soul that he doesn’t know if he can contain. She’s smart as hell, or maybe she’s actually from Hell.

Neo can’t lead the Black Dragon Brotherhood in their fight against evil if he can’t get back to their headquarters in Rogue with news of the newest threat from Hell – shadow warriors.
His best bet is the luscious, curvy fire witch who doesn’t seem to know how to use her powers, but has the tainted human lawmen running in circles with her sexy-as-hell smarts.
When her powers surface and bring the shadow demons and their human minions down around them in force, he must choose.
Save his one true love, his fated mate, the woman who can redeem his own soul, or save the world.

*Part of this story were previously published as A Touch of Fate. This new full-length novel version re-imagines the Fated For Curves series with dragons as the heroes.