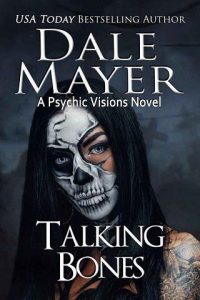 Hiding out in the French Quarter of New Orleans only made sense for someone like Skylar Livingston. Owning a voodoo shop was just an added touch for fun. It also helped with her cover, plus gave space to the multitude of ghosts in her family. And her shop was close to the cemeteries, … a very necessary part of her … hobby.
Gage Hawkins was tracking his uncle’s last movements before his disappearance hunting a special set of tarot cards which led to Skylar’s shop, Talking Bones. After a bad head injury that brought weird sights into his view, Gage could see this Talking Bones place and Skylar were special. He could only hope she had answers because he had a lot of questions …
Skylar preferred the dead to the living most times, but Gage had her reconsidering. Until she realizes something is wrong in his world, and it’s quickly overtaking hers.

When Gage’s uncle turns up dead, more than the undead are in Skylar’s world. … A killer is too …