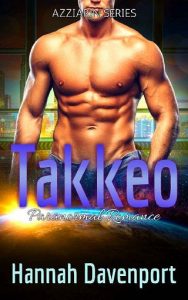 Takkeo:
Years ago, I was the foolish teenager who decided to leave Jakke’s ship and deliver a medical kit to the Azziarin soldiers on Earth. I only wanted to help. I never expected to get chased by the Trueis and break my leg. A human, Sydney, rescued me and kept me safe and semi-fed until my people rescued me. After she was hurt in the process, I demanded that someone bring her aboard the ship to be healed. I never expected her to turn out to be Jakke’s true mate.
And now, years later, humans are an integrated part of our culture. We have a human camp set up near the ocean, letting them slowly join our society.
I never expected that my encounter with Sydney would change our entire culture, but it did.
Thankfully, Rikker developed a stronger serum that almost completely suppressed the mating fever. I did not want a mate, at least not now. I had to prove myself to my family before I could think about settling down.
And then I met Parker, and it flared my anger. How could a male ignite my protective instincts and start the mating fever?

Parker:
Parker is my last name, and I never saw a problem with it. Until now. How was I supposed to know that everyone would assume that I was a teenage boy? Yes, I chopped off my hair. It wasn’t like there were loads of beauty shops open when the Trueis invaded Earth. And with all of mom’s men — okay, I’ll admit she might have been a prostitute — I dressed in ugly, baggy clothes after the first creepy guy gave me the once-over.
After the Azziarians rescued me, I used that word loosely – I never expected to be housed with the guys. Every night, I watched them undress and climb into bed while I slept fully clothed.
Dillion, my best friend, thinks I’m a fourteen-year-old boy, and I can’t figure out how to clarify that I’m a twenty-one-year-old woman without him getting upset at me for lying.
And then I met Takkeo.
He took my breath away with his rippling muscles and gorgeous blue eyes. My heart raced as I stared at his perfection. And then he spoke — hissed really—and his irritable disposition pissed me off. At that moment, I decided to admire him from afar.
Things went from bad to seriously uncomfortable when I was attacked and then rescued by Takkeo, where he found out I was not a boy but a woman who hid her body under baggy clothes.

Now I have to deal with the aftermath of my silence. Somehow, I have to tamp down my desire for Takkeo and hopefully not lose my best friend, Dillion, in the process.
Everything just got complicated.