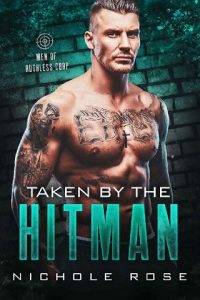 A little ball of sunshine just ignited this hitman’s world.

Kieran “Ghost” Knight:
No one sees me, even when I’m standing right in front of them.
Until I meet Savannah Greenway.
She’s a little ball of sunshine with the sweetest smile.
She sees me even though she shouldn’t.
Even though it’s dangerous for her.
She thinks I’m a good guy. I’m not.
My past is littered with bodies.
When I think about the future though, all I see is her.
I have no business claiming her.
That won’t stop me.
I’ll walk through hell if that’s what it takes to make her mine.

Savannah Greenway:
Kieran Knight appeared out of the dark like an avenging angel.
He saved my life even though it cost him his job.
He thinks I don’t know who he is.
He’s wrong. I know he kills people for money.
I know that should matter to me. It doesn’t.
My past is full of pain.
When I think about the future, all I want is him.
Maybe I shouldn’t want him, but he was made for me.
And I won’t give up until he sees it too.