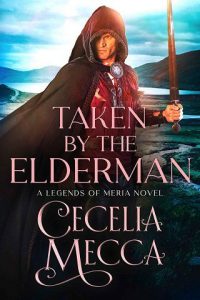 Kidnapping the queen’s sister was never part of my mission.
The Elderman: I’ve taken too many vows, including those of an Elderman, pledging myself to God, to be enticed by a woman such as Lady Hilla. I will not deviate from my mission because of a traitor, even one as intriguing as the princess.

The Princess: Finally separated from the vile man I’d been forced to wed, I yearn to be reunited with my sister, the Queen of Edingham. My only goal is to aid her in bringing the vicious renegades to heel and reunifying our feuding kingdoms. It seems, however, that my mysterious new keeper has other plans for me.

From the dangerous Borderlands and the lush southern capital of Meria to the untamed wilds of the northern lands of Murwood End, two unlikely allies band together on a journey to save their kingdoms. From enmity comes forbidden love—while the Elderman’s secret identity, one that threatens to tear this new love apart forever, is revealed.

Fans of The Last Kingdom and Vikings who also enjoy a little HEA in their epic medieval sagas will love Taken by the Elderman, a standalone romance and also the third installment in the Kingdoms of Meria series.