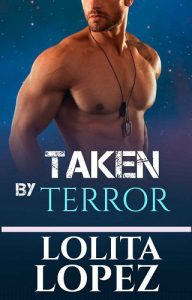 Terror has never wanted a mate. He’s too damaged, too dark, to ever deserve a wife and family. At least, that’s what he tells himself until Maisie enters his life.

Born deaf in a world that reviles the imperfect, Maisie has resigned herself to a life of loneliness. Until the day she’s thrust into Terror’s prison cell with orders to keep him alive, that is.

Refusing to leave her behind, Terror mounts an off-the-books rescue and brings her back to the Valiant. Before he can collar and claim her, she’s arrested for crimes she never committed.

Terror’s past sins have returned to haunt him, and now Maisie is in the crosshairs of the Shadow Force and the Splinters. Determined to save her life and prove her innocence, he takes her and runs.

But Terror isn’t the only one with secrets. Maisie holds the key to a life-threatening conspiracy. As they crisscross the galaxy, they’ll have to decide how much they’re willing to sacrifice.

They’ll have to choose between their love and their dreams of a future together and the lives of everyone they hold dear.