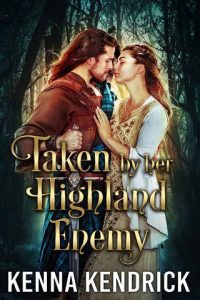 She was clothed in strength and dignity, even if she feared the future…

Isabelle Cutler is playing a most dangerous game. Dressed up as a boy, she is secretly giving information to a Highlander with the hopes of helping the oppressed Scottish people. Isabelle’s motivation is not only roused by her high ideals, but by her forbidden desire for the strong warrior.

Eamon Wilson was running away from his guilty consciousness his whole life, but now he needs to stop. To atone for his past sins, he informs his brother, the famed “Wanderer,” of a pending threat by the English Lord Cutler.
Faced with his brother’s disbelief, Eamon’s only ally to convince him is a young boy, his informer. When the two Highlanders team up to take down the threat, they end up with a dangerous mission; abduct Cutler’s daughter.

Once Eamon faces Isabelle, his sense of familiarity drives him to claim a kiss. Until he remembers that she is a Sassenach, an enemy.
Now Isabelle must protect her identity while controlling her passion for the man who will kill her if he finds out the truth…
He was running from his past; she was fighting for her future…