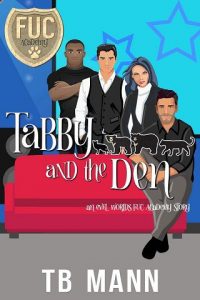 An Asian moon bear, a black panther, a sloth bear, and a Russian blue feline walk into a stripper bar…

As a domestic cat shifter, computer genius Tabitha knew the closest she would ever get to being a FUC agent was as a tech. Not even bullying taunts would stop her. But a surprise meeting with the director fulfills her greatest wish… and her worst nightmare.

The well-honed team of Bae, Arin, and Kasim are agent idols. Everyone wants to work with them. But the two bears and panther are a closed unit, without room for anyone else. Especially a silver-blue-haired cat who makes them roar and purr.

When Tabitha is kidnapped by the man they’re investigating, the guys discover there’s a fine line between love and hate. To find her, they’re willing to burn the town down. But heaven forbid she’s hurt… because then the claws will come out. For no one touches their Tabby except them.