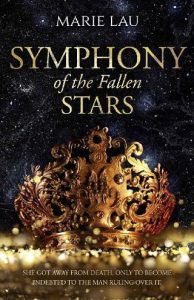 He is Death incarnate, collector of lives. You only get to meet him once: the moment you die. But he makes an exception for Cassiana; instead of taking her soul, he saves it. But for what price?

Just imagine Death incarnate wouldn’t kill, but save you. As crazy as that might sound, that is exactly what happens to Cassiana. All she’s ever known is her desire to become famous. When she gets a chance to perform a play in front of the King of the fae, her breakthrough seems within reach. But what begins as a hope for her future becomes a nightmare when the fae King decides to kill her.
That is, until a man much worse than the King of the fae saves her: the Deathbringer. He is a creature as old as life itself. A man known not for saving, but for taking souls. He is ruler of the Dead, King of the Afterlife, and nobody has ever laid eyes upon him. At least, nobody living.
With his striking features, his mocking attitude, and that dark hair that shimmers like the stars of the night sky, he is nothing like Cassiana has imagined him to be. She’s left wondering why he, King of the Afterlife, bothers to save her.
Whatever his reasons for saving her are, she owes him now. And what scares Cassiana most isn’t the debt she needs to repay. It’s the way she’s looking forward to doing so.
The Deathbringer’s darkness calls to Cassiana, begging for her touch, her affection, and her love. Will she be able to resist it?