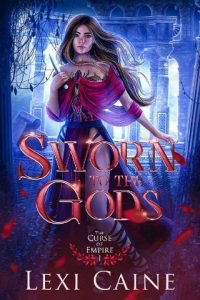 Four bound gods. One mortal woman. A choice to bring the fall of the empire.

I’m left with only bad options when the oaf determined to marry me hunts me down. It’s either hide in the forbidden catacombs or be forced into a sham of a marriage, but there’s a reason mortals avoid the crypts. Deep in the underground, I send up one last-ditch prayer to any gods listening.
I don’t expect one to answer, much less four.
There’s always a catch with men, and these gods are no different. Erebus, god of darkness, Eros, god of passion, Helios, god of sun and fire, and Thanatos, the dark god of death, all expect me to bond as their tether to the mortal world.
They’re set on a dangerous quest to regain their powers. I know I’m in over my head, but I can’t deny I’m drawn to them—all of them. But there’s more at stake here than I can deny. Freeing the gods means an end to the empire as we know it… and learning to rely on someone besides myself.