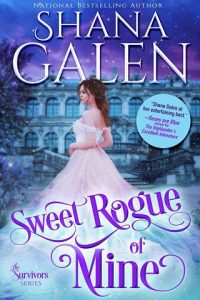 A sharpshooter who’s lost his sight…
When a stray pistol ball from the battlefield took Nash’s sight, it also took his entire identity. He’s retreated to his father’s county home to lick his wounds, but his drinking and isolation have only made things worse. When Nash’s father, a powerful earl, threatens to send Nash to an asylum, his former brothers-in-arms call in one of their own to set Nash back on the right course. Nash fears he’s fallen too far and perhaps ending it all is the best solution. Until he encounters a woman in the garden singing a bawdy tune at the top of her lungs.

An outcast who sees too much…
Prudence Howard has traveled the world with her missionary parents. But after the scandal she caused in Cairo, they’ve foisted her on a vicar in the small town of Milcroft and sailed to the Far East to evangelize without her. Pru doesn’t mean to cause trouble; it’s just that being good is so very hard. When she meets Nash Pope, she’s instantly intrigued. He might be hot-tempered, but he’s handsome and unusual and arouses her interest and passion like no one she’s ever met. He might not know he needs or even wants her help, but Pru has a plan to save him.

Together they glimpse a brighter future.
Nash is bewildered by the unconventional woman who keeps turning up on his doorstep. She tries to teach him night writing, claims a feral peacock is a momentous sign, and makes his toes curl when she kisses him. She refuses to give up on him. But though Nash finds it easy to believe in Pru, can he ever trust himself again?