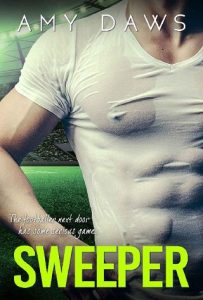 The c*cky footballer next door has some serious game…luckily, Daphney Clarke knows how to play.

Zander Williams is the hot new American determined to take European football by storm. His head is so big, it barely fits under his backwards hat. And when he’s recruited to one of the biggest up and coming clubs in London, he’s certain to make his name known.
Managing the building where they live is only one of Daphney’s many jobs. It’s why she has zero patience for the obnoxious American on the other side of the wall who makes the most ungodly noises and likes to answer his door in nothing but a pink tea towel.
Tensions build and after one steamy hallway kiss, neighbor wars quickly shifts into neighbors-with-benefits and that’s a battle they both intend to win.
But Daphney doesn’t know the real reason Zander is in London and now she’s stuck in the middle of a game she didn’t even know she was playing.