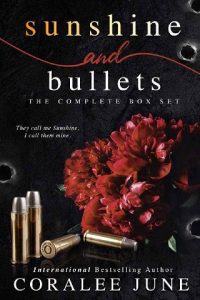 Sunshine.
It’s a nickname I haven’t heard since I lived on Woodbury Lane, where the houses were pretty but the secrets? Deadly. It was a pet name known only to the Bullets. Rough, violent, and ruthless, they laid claim to the town — and my heart.
I wasn’t supposed to fall for a boy from the wrong side of the tracks—especially not four of them. But they were the only ones who understood that sometimes hell hides in plain sight.
I was the girl with all the conveniences a privileged upbringing could provide. The world only saw two loving parents and a pristine home life, but I knew the truth. And it was going to get me killed. So, I disappeared, from everyone and everything I’d ever known. I changed my name and my appearance, but the scars I carry, they’re still the same.
The Bullets are all grown up now, too — a crime boss, a pro fighter, a bounty hunter, and a federal agent. Life took them in different directions, but they once shared the bonds of a brotherhood forged under the harshest conditions. Together they were fearless. Brutal. Unstoppable.
I’m praying they can find that unity again. If I’m going to survive this, it’ll take everything they have. Because that’s the thing about running from the past.
Eventually, it catches up to you.
This box set contains the complete Bullets Trilogy.